It’s a Zen thing.
Is there anything harder than trying to think about
absolutely nothing?
My dog sits better than me.
Some of the things I think about while waiting
for a bolt of enlightenment to strike my monkey mind:
Polar bears. Did I leave the stove on? My nose itches.

Like I said, my dog is better at this than I am.

My legs ache. My left foot is cramping up.
Now all I’m thinking about is the pain in my foot
and the numbness in my butt.
I want a cigarette … and I don’t even smoke.
If I can just clear my mind and meditate on nothing but nothingness …
Om. Om. Om McDonald had a farm…
Om. Om. Polar bears again. Damn.
I am excruciatingly aware of a plane buzzing around overhead.
And somewhere within a 10-block radius someone’s wrist watch is beeping.
On the hour. On the hour … that means I’ve been sitting zazen for all of, oh,
10 bloody minutes … so why does it feel like 10 bloody hours?

My butt hurts. It’s gone from Om to Numb in less than a quarter of a detached hour.
But time is irrelevant. Does anybody really know what time it is?

And would that be the time that’s spiralling forward,
or the time that’s speeding off in the rearview mirror?
And how come we can remember the past but not the future?
Because … if time is ticking off in more than one direction,
as Einstein may have suggested
in a faster-than-a-speeding-bullet moment of temporal detachment …
shouldn’t we be able to remember the future?

Time out. Time flies. Time to kill. Time to get a haircut.
Time to think … No! No thinking! Time to clear my head. Time to stop
and smell the roses. A rose is a rose is a rose …
and what is the smell of no roses among no noses?
Is it anything like the sound of one hand clapping?
And how does that compare to the sound of my big butt napping?
And somewhere I can distinctly hear a dog yapping …

But that is not my dog; my dharma dog is off in a corner, sitting.
Sitting pretty. Sitting, and no doubt with absolutely nothing
on her mind but a big batch of doggie detachment.
She appears to have detached from all but her own breathing.
While I, on the other hand, I have managed to detach from nothing
except all feeling in my feet and butt.
Detach? I hopelessly try. I spy, I spy with my little Zen eye … something that is … detached. God, I so want to be detached.

They say if you see the Buddha in the street, kill him.
I have come nowhere close to seeing the Buddha,
but I am now seeing polar bears again and om, um,
… perhaps I should settle for semi-detached?
I can’t go three seconds without thinking dumb, unZenlike thoughts.
Clarity may be the goal, but sifting through neurotrash is the reality.

And detachment … do I really want to detach?
From the love? From the links to the heart?
Can my impossibly human, earthbound heart possibly handle that?

Detach from longing? Detach from the world? From pleasure? From beauty?
From you and your impossibly sexy shoulders?
From my desire to jump and hump your bones
and all their unenlightened corporeal attachments?

Wonderful. I’ve been cross-legged for so long my entire body has gone to sleep
except for the part that was supposed to go to sleep: My conscious mind.
And I realize that all I really want to do now is detach
from this blankety-blank detachment.

Om Sweet om
Om is where the heart is
Om … um … is anyone else thinking about polar bears?

on saturday, i made a phone call to my cable provider, asking them to disconnect my service. the chop comes on wednesday.

why? because, to paraphrase the boss: “57 bazillion channels and there’s nothing on.” 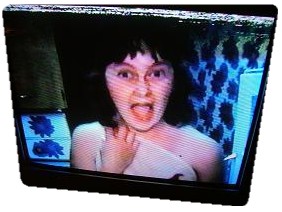 this decision did not come easily.
i’m a boomer; part of a proud, gluttonous generation that has never NOT known television. a child of the sixties, i watched with my mom in disbelief as reports of the JFK assassination crackled out from our grainy little black and white t.v.
the whole family huddled around that same box when the beatles made their first appearance on the ed sullivan show, and whenever the wizard of oz made its annual appearance (it wasn’t until a decade later, when our parents finally replaced the rabbit-eared B&W with an electrohome colour model, that we discovered the yellow brick road actually turned yellow, and the ruby slippers really were ruby).

walt disney, a charlie brown christmas, the brady bunch, mannix, mission impossible, the wild, wild west, get smart, gilligan’s island, the beverly hillbillies, red skelton, i love lucy, the monkees … i grew up on a steady diet of television. (obviously not all of it “quality” programming.) our mom had no time for afternoon soaps, but she would call us in to watch if there was a guest on a talk show she thought we should see — like janis joplin guesting on dick cavett. (i didn’t appreciate it at the time, but i realize now that most moms back in the day were trying to limit their kids’ exposure to artists like janis joplin, not encouraging it. so, thanks, ma.) she also made sure we witnessed neil armstrong’s giant step for mankind, and the maple leafs’ exploits every saturday on hockey night in canada. the mod squad was allowed, much to my older brother’s chagrin, on a school night provided i got my homework done first. and she didn’t make us watch tommy hunter or hymn sing, for which we are eternally grateful.

hitting adolescence in the early ’70s, i spent countless hours in front of the tube as the hot-button social and political issues of the day — racism, sexism, vietnam, watergate, women’s rights, gay rights — were played out more and more on the small screen. the times, they were a-changin’, and this was not merely reflected on the nightly news, but dealt with on popular sitcoms like all in the family, the mary tyler moore show, m*a*s*h.

fast-forward to right now … and those same shows, along with other less-worthy time-wasters, are still in syndication all over the airwaves, squeezed in amongst re-runs of newer shows like seinfeld, friends, the simpsons, sex and the city, etc.

which brings me back to why i’m pulling the plug: i can no longer ignore the fact that most of the shows i end up surrendering a chunk of my brain to when plunked in front of the tube at the end of the day are not new, current network offerings with any social and/or political relevance or even a smidgen of life-enhancing entertainment value, but repeats, ad nauseum, of repeats of repeats (see seinfeld, friends, etc., above). i mean, the dance moves of elaine benes almost cause me to — dare i say it? — ROTFL & pee myself, but 18 times a day? all things in moderation. please. and there’s the rub, because TV has never been about moderation, has it? it’s all about saturation. and i’ve hit my saturation point.

outside of 30 rock and law & order (svu & ci), there’s nothing on that interests me any more. i gave up on ER two seasons ago because the cast members kept getting younger, more shallow and less likable. i absolutely refuse to watch alleged “reality” shows, which bear no resemblance to any real life on my planet; shows where, in fact, the objective seems to be to subject “ordinary” (REAL!) people to judgment, scorn, humiliation and ridicule; ordinary people who are willing to eat bugs or proclaim to the world that they’re stupid (at least stupider than a fifth grader; stupid enough to eat bugs) so they can have the 15 minutes of fame they believe they’re entitled to. and there’s now the converse: the pathetic “reality” of former child celebs trying to reclaim the 15 minutes of fame they pissed away 25 years ago and feel they’re still entitled to (the two coreys, scott baio is 45 and single … arghghgh)

there’s also a phenomenal preponderance of shows based around experts helping you remodel — remodel your house, your garden, your diet, your wardrobe, your kids, your marriage, your dog, your financial portfolio, your sex life, your colon. my, my, my. aren’t we a sad lot, in need of rescuing on so many levels.

well, sorry, oprah and ellen and all you hysterically real & genuinely flawed folks in search of prime-time redemption, but i’ve had it with your lyposuction and your colonoscopy and your “final answer” and your “giggity, giggity” vulgarities invading my living room. life is too short to spend it sitting in front of a soul-sucking, madison avenue-driven squawkbox.

i will miss jack mccoy and olivia benson and bobby goren, and boy, will i miss tina fey … i’ll even miss the occasional old hippy concert special on PBS (notice how everything always comes back to the sixties?), but that’s about all.

from now on, i’ll get my daily news fix from reputable internet sources, not from some idiot local anchor who thinks he’s a stand-up comic, thank you very much; and the $60 a month i’ll save on cable costs will pay for a couple of decent bottles of red wine, or a nice dinner out, and the occasional DVD i’m resigned to purchasing when i really need a fix.

three days and counting. til then … please pass the remote.