“how can a free spirit ever possibly take flight living in a place called BARRIE?”

i scream this at my mother who cannot seem to understand why i am packing up my ’75 datsun b210 rustbucket and driving 2,000 miles away to take a job in alberta.

my mother isn’t getting it, but my 22-year-old gut knows that after three years as darkroom technician and general reporter at the bi-weekly bugle, it’s time to move on. 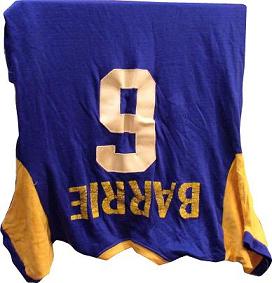 barrie is suffocatingly safe. it’s vanilla. it’s boiled potatoes and wonder bread and piano lessons on monday afternoons. it’s church rummage sales and junior B hockey. vodka smuggled into high school dances, labatt’s blue at the underage skating parties. april wine and foot in coldwater at the college pub night piss-ups. it’s an excruciating hour’s drive from toronto, which at least has a pulse. it’s waking up greasy and groggy after all-night poker games with the guys in the bullpen.

barrie is so boring that we don’t actually play poker at our poker parties — we play hearts and euchre. but we do eat chips and drink beer and smoke cigars in an attempt to invoke the sleaziness quotient of poker. still, barrie is so boring that we don’t even smoke real cigars, we smoke colts — which involves very little actual smoking and is more about sucking on the wine-flavoured tips.

my mom doesn’t seem to get this but barrie is so boring, we drag ourselves down to the lake and sit on the dock and just sit — sit and watch motorboats pull up to the docks and wonder why anyone with money enough to buy a boat would bother to come aboard at kempenfart bay. because there is sure nothing to do in our sleepy little town. no good restaurants — unless you LIKE cigarette ashes with your sweet & sour chicken balls from lem cho’s — and only two rinky-dink movie theatres — the roxy and the imperial, which never show anything good, just sappy walt disney stuff like hayley mills fighting off some guy trying to kiss her, or hayley mills smoking cigars in the boiler room of a convent. four-star bopperfests.

barrie is so boring, there isn’t even a mall. all we have is mother’s pizza and towers department store. when i was in high school we didn’t even have a freakin’ mcdonald’s, just root beer and teenburgers at the dub; and it was all we could do to convince the waitresses at the crock & block to serve us draft beer in their frosted mugs, because we were only 16 but not bad enough girls to have fake I.D.

back then it was firenze pizza and tom collins chasers, and midnight tokin’ with our steve miller LPs in molly jackson’s basement. back then the air was always oppressively humid and even the liberals were frighteningly conservative. now it’s jogging on the track at the Y after work, and lunch with harris and timer and richie every wednesday at the town & country lounge — where the soup is always french onion and the special is always beef dip — except on fridays, when god help you if you don’t want fish & chips.

but my mom still doesn’t get it.

“you remind me of me,” she says. “when i was your age i wanted to move to alaska and have six kids. i never did that. but you …. you figure out what you want and you go after it.”

then why won’t she let me go?

i may not know exactly what it is i want, but i do know what i DON’T want: i don’t want to live my entire life in a white-bread, tim hortons-and-beef-dip town and end up sixty years later being buried in a place called barrie.

i don’t want alaska or six kids, either, to be sure … but whatever it is i do want might just be waiting for me in alberta.

i hear the weather’s good there in the fall.

One response to “barrie me not”