when i was in grade 6 i loved those alfred hitchcock collections full of murder mysteries and quirky tales of the macabre. so when john lavallee offered to swap me a 50-cent paperback hitchcock anthology for a bic pen, i didn’t waste any time saying yes.

the book featured lots of neat dark stories … many of them i still remember. one in particular has stayed with me for almost four decades. i don’t recall the author’s name but the title was “For All The Rude People.” It was about a guy who decided to wreak a little vigilante justice (e.g. death) to people he observed treating other people like crap.

now I’m not about to take things that far, but I do find myself thinking about the character in that story more and more these days. particularly when i’m on the bus. because stepping onto an edmonton transit bus seems to turn otherwise polite citizens into completely insensitive, inconsiderate dorks. so i’ve decided this behaviour should not go unpunished. don’t worry, i’m not going to follow you to the end of the line and kill you, like the fellow in the alfred hitchcock story did. but i am going to rant about you and your ignorant, offensive, childish behaviour in this blog from time to time, in the hope that pointing out your social flaws helps improve your manners and ultimately makes the world a better place.

let’s start with this afternoon, when i was on my way home from the drugstore. the bus was full, but since i didn’t have very far to go, i didn’t mind standing near the back. however, an elderly gentleman boarded the bus a few minutes later, and he also ended up having to stand because there were no empty seats.

i did a quick scan of the seated passengers in the front half of the bus. there were at least six white males, all clearly under the age of 30. sitting. yep, six able-bodied strapping young men remained in their seats while a senior citizen stood unsteadily in the aisle.

eventually someone stood and offered a seat to the grey-haired gent. but it wasn’t any of the young men. it was a young woman in her 20s.

now if you’re about to suggest that feminism is to blame for the death of common courtesy, think again. this isn’t about men opening doors for women, or lighting their cigarettes. this is about people being courteous to each other, period. when seniors, or disabled persons, or pregnant women, or women with kids in strollers board the bus, and you’ve got two working legs, act like you’ve still got the good sense the goddess gave you and GIVE UP YOUR SEAT. it’s not rocket surgery. (and oh, move your backpack off the seat beside you, too. why should your bag ride when someone else is forced to stand?)

next on the hit list is celebrity hat etiquette: when you play for the oilers, and you’re dining in public, take your freakin’ baseball cap off at the table. i don’t care how much money you make not scoring goals, dude, it is grossly disrespectful to wear your hat to the table. it suggests you were born in a barn, and lack even the most basic of social skills. so unless you’re camping, or at a barbecue, lose the lid. An NHL contract is not a licence to behave like a boor. like it or not, you’re a role model to some of the kids in this town, so here’s an idea: act like your momma raised you right.

another public transit horror: i recently overheard two young dudes, both of whom appeared to be around the age of 20, chatting while they blocked the back doors of a bus (infraction No. 1: don’t stand in front of the doors. It’s an exit, not a dance floor). one guy very loudly said to the other: “hey, d’ya wanna know how to fix your dishwasher?” the other guy said “how?” & the first guy roared: “HIT HER!!!” at which point they both laughed uproariously, like this was the funniest thing either of them had ever heard.

now listen up, assholes: sexism is not funny. physical abuse is not funny. domestic violence is not funny. it’s a crying shame that in this day and age, boys like you are still somehow picking up signals that it’s not merely OK to beat up the women in your lives, it’s downright amusing.

that is way beyond rude, gentlemen. it’s a disgrace. 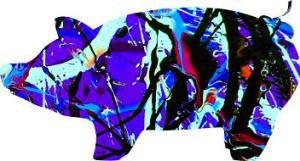 dishonorable mention: to the large sweaty guy in the “overworked and underf*ked” T-shirt — here’s a quarter, go out and buy a clue. you wanna get lucky? try being a lot less vulgar. a walking billboard for profanity may work in the WWF, but it doesn’t exactly send out “man of your dreams” vibes, sugar.

8 responses to “for all the rude people”