(This Top 30 comes to you courtesy of Edmonton Winter. It’s a list of things that keep me here despite weather like, well, like the royal blizzarding we’ve had this week. Today’s item is a true summer gem: The Edmonton Folk Music Festival.)

I lived in Edmonton for almost a decade before I ventured to Gallagher Park on the second weekend in August. Friends had gushed on about Edmonton’s storied folk music festival, yet for some reason I steered clear of it until the early ’90s.
Then I got my first taste … and have been hooked ever since. 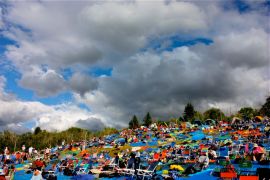 My fave year remains 1996. That heavenly lineup featured Jann Arden. Joan Armatrading. Laura Love. Roseanne Cash. The Flirtations with Suede. (One of my favourite FF workshop memories is Suede recalling being asked if the Flirtations ever played at weddings. ‘Our people aren’t allowed to HAVE weddings,’ she replied with a grin. My, how times have changed.) k.d. lang in a dashing white suit belting ’em out during the Sunday finale. (Garth Brooks was also in town that weekend, and he stole the front page spotlight in the local tabloid. Twice. Harumph.)

Other highlights from over the years: Mary Gauthier rockin’ Wheel Inside the Wheel with Buffy Sainte-Marie’s band. A Stage 6 folkapalooza with Kate & Anna McGarrigle, Nancy Griffith, Tom Russell, plus Greg Brown if memory serves (and it doesn’t always). The northern lights dancing across the eastern sky as the Indigo Girls closed out the 2002 festival …

Melanie and her son lay down Candles in the Rain

There have been amazing blasts from my teenaged past (Melanie,
Al Stewart, Linda Ronstadt, Joan Baez, Bruce Cockburn …)

There have been marriage proposals … and actual weddings … and a whole lotta flirtin’ in between. Oh yeah, baby.

Each August I heard things that caused me to race to the ‘record tent’ to purchase music by artists I’d never heard of and who now, years later, still feature prominently on my iPod.

Of course, I’ve missed a few folkfests here and there – we always seem to be out of town when Emmylou Harris drops in. And family commitments prevented me from hearing Joni Mitchell and Elvis Costello in ’94. Chris Isaak shuttin’ her down a couple of years ago? I was, I confess, too tired to stay around for the finale that year. But managed to stick for the return of k.d. lang and the Siss Boom Bang this year; another outstanding lineup from three decades of outstanding lineups. Other 2011 notables (for me) were Imelda May, Lissie, Angelique Kidjo, Lyall Lovett and Jeremy Fisher, to name just a handful.

Rather than gush on and on about how wonderful this festival is — I haven’t even mentioned the green onion cakes, chickpea curry, getting all folked up in the beer garden on more than one occasion, eating lunch with Dar Williams (still kicking myself that I didn’t have the guts to introduce myself and my partner as Jane and Amber), or the legendary tarp races of last century — I’ll just sign off with a gallery of snapshots from over the years.

It’s all about the green

Marriage proposal in the beer garden, 2011

Tarp lineup, in the old days

Melanie and her son lay down Candles in the Rain